Profit for the year** 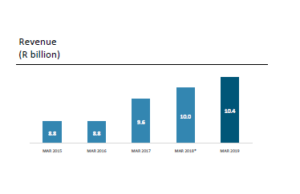 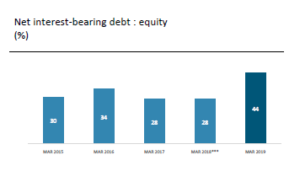 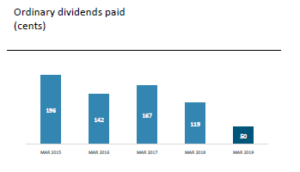 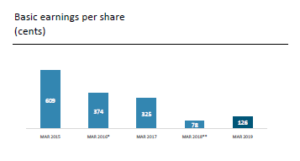 “THIS HAS BEEN ONE OF THE TOUGHEST YEARS ON RECORD FOR THE GROUP. IT IS THEREFORE MOST PLEASING TO REPORT THAT REVENUE FOR THE GROUP INCREASED BY 5% TO R10.450 BILLION.”

OVERVIEW OF THE YEAR

This has been one of the toughest years on record for the Group. Almost every sector served by the Group in South Africa (from which the Group derives about 76% of its revenue), has been under severe economic pressure. The generally poor economic conditions in South Africa, and months of uncertainty leading up to a general election in May 2019, contributed to a general decline in demand for products across our product range.

It is therefore most pleasing to report that revenue for the Group increased by 5% to R10.450 billion. A number of acquisitions were made during the year, which contributed R254 million to revenue. The challenging trading conditions resulted in a decline in gross margin, whilst overheads increased due to take-on and rationalisation costs of acquisitions and once-off costs of right sizing some existing underperforming businesses. As a result, operating profit declined from R839 million to R690 million.

The tax dispute with SARS was settled for R750 million during the year and has been fully provided for in the accounts, of which R550 million was provided in prior years and R200 million in this year. R450 million of the settlement has been paid to

SARS to date and the balance is payable over the next 4 years.

The interest received/paid and dividends received from financial investments have reduced substantially in the year under review due to the settlement of financial transactions.

The Group has reassessed the accounting treatment of the repurchase of agency distribution rights agreements within the ESG operations and the amortization of intangible assets primarily related to these rights. This has resulted in the restatement of financial information in the prior periods. The comparative financial information has accordingly been restated and is detailed in the relevant notes to the financial statements.

Revenue grew by 15% to R5.238 billion, of which R254 million came from acquisitions during the year. Trading conditions were challenging, with the significant sectors which are serviced by ESG (mining, manufacturing, agriculture, general industry, construction) all experiencing headwinds during the year. These market conditions presented good acquisition opportunities, which ESG took advantage of. The acquisition of the Forge Industrial Group, which operates mainly in the Tool and Belting sectors of the economy, and the Driveshafts Parts business, operating in South Africa and Poland in the replacement drive shaft parts sectors, were concluded during the year. A total investment of R331 million was made in these businesses. The tool business was amalgamated with ESG’s Mandirk (tool) business, but major restructuring was required to turn the business around. The turnaround strategy has, unfortunately, taken longer than expected to implement, but the combined tool business is expected to be profitable during the first quarter of the new financial year. The other core businesses in ESG have grown and the first phase of the consolidation and rationalisation of the logistics operations at BMG World are finally being completed and bedded down.

CEG revenue declined by 5% to R4.831 billion largely due to an overall decline in demand. The sectors serviced by CEG – agricultural machinery, construction machinery and the forklift sector – all experienced a significant decline in unit sales and gross margin in South Africa, due to the prevailing market conditions. CEG’s focus on annuity type business gave it protection and the improved contribution from Kian Ann Engineering Group (based in Singapore) helped CEG to limit its decline in segment operating profit before interest on financing transactions and foreign exchange movements to 17%. CEG has managed to maintain its market shares in South Africa and has once again managed to contain costs and generate cash.

Trading conditions have settled since the elections in May 2019, but they still remain challenging. Management expects the coming year to be more positive than the year under review, but anticipates a slow return to growth. Management will focus on bedding down acquisitions, prioritising cash generation and return on equity.

CHANGES TO THE BOARD AND BOARD COMMITTEES

Mr. LR Sherrell was appointed to the audit committee on a temporary basis with effect from 16 November 2018. The board is in the process of appointing a new independent non-executive director to serve on the audit committee, which will bring its composition back in line with the recommendations of King IV. Ms. R Naidoo resigned effective 25 September 2018 as an independent non-executive director.

There have been no further changes to the board or the membership of its committees.

In light of the tax settlement and the resultant higher gearing in the group, the board has resolved not to declare a final dividend. It is anticipated that the normal dividend policy (of a total dividend cover ratio of 3.5 times at interim results adjusted to 2.75 times at year-end) will be resumed once cash flows and gearing permit.

The board is once again highly appreciative to the executive management, the respective management teams of our businesses and most importantly all the staff, for the excellent commitment and performance in what can only be described as difficult and uncertain economic times.

The board is confident that, with the strengths the Group possesses and the strategic plans, the Group will continue to deliver sustainable value to all stakeholders going forward.